The Effects of Israeli Unilateralism on Palestinian Violence 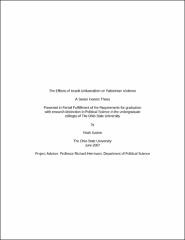 The overall goal of this project is to find what short term effects the 2005 Israeli unilateral disengagement from the Gaza Strip has had on Palestinian Violence towards Israel. Israel has recently shifted from a multilateral negotiation style to unilateralism and the effects of this policy change are still unknown. This project will start with a quick history of Israel’s previous negotiated settlements and the road to unilateralism. The introduction will also examine why this topic is of importance and show the different arguments for the possible results. There are two important variables being examined in this thesis. The first variable is the Palestinian sentiment towards Israel being examined through Palestinian public opinion polling. This generally looks at the level of support for violence against Israel and support for the peace process. It is measured by looking at polls over the time frame of 1994- 2006, which show how the Palestinian people reacted to different negotiations during the peace process and then also the reactions to Israeli unilateralism. The second variable that is analyzed is the actual level of Palestinian violence through a specific dictated measurement. For the purpose of this research assignment, I have defined an act of violence as any attack that results in the death of an Israel or as a suicide bombing that resulted in the death of the attacker. I then was able to run a search of New York Times articles to come up with a consistent and accurate count of violent attacks. There are also a few independent variables that could be playing a role to see if violence is stemmed from unilateral actions and these therefore must be given close attention. These variables are based on the political and military environment that is happening at the time being examined. This includes the level of aggression from the Israeli military towards the Palestinians and also the level of previous violence being asserted from the Palestinians. Another independent variable would also be whether the Palestinians believe that a deal is fair and justified. There are also several other factors, such as the current leaders and prominent political parties on each side, the amount of Israeli settlements, and Israeli and Palestinian foreign policy could all affect the level of Palestinian violence. The time frame for this thesis, as mentioned previously, starts in 1994 with the Oslo agreement, the start of the peace process. It then examines the evolution of agreements and negotiations and looks particularly at the start of unilateralism. The time frame for the violence counts starts in 2003. This four year period (2003-2006) allows for the examination of the level of Palestinian violence for the immediate periods before, during, and after the withdrawal from the Gaza Strip. This time period also includes the Quartet Roadmap and also contains a year before unilateralism was formally announced. As mentioned, the public opinion polling examination dates are expanded to include a more formal study of the Palestinian response to the start and end of the process followed by the advent of the Israeli policy of unilateralism. In the end the hope is that a clear answer will be found on the effects of unilateralism on violence between Palestinians and Israelis. I have discovered that as the withdrawal from the Gaza Strip neared and was accomplished, there were fewer attacks against Israeli targets in total, and a much fewer proportion against Israeli civilian targets. It seems that the Palestinian violence, as could be suspected, has become more similar to what might seem like traditional state versus state violence. The study then concludes with some brief policy recommendations and conclusions.