Democratic Assassination: The Morality and Efficiency of Targeted Killings as a Policy Tool 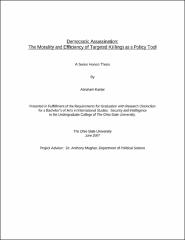 As early as 1516, Thomas More proposed that the assassination of political leaders could be useful both as a tool of statecraft and “as a means of sparing ordinary citizens the hardships of war for which their leaders were responsible.” This proposal of tyrannicide, while perhaps a bit shocking in its boldness, rightfully deserves consideration in an era in which the traditional state expression of power, war, now threatens to be more catastrophic than ever before. Democratic states, which seek to minimize human suffering, must now seriously consider assassination as an alternative to war. This thesis is a study of the overall feasibility and justification of political assassination as a tool of foreign policy for democratic states. It is intended to be as normative in its suggestions for utilizing assassination as it is descriptive of assassination’s moral concerns and historical efficiency. Although democracies seek to avoid violence, it cannot be completely foresworn, and democratic assassination policies seem to be a possible means of dealing with otherwise unmanageable authoritarian leaders and terrorists. As a result, assassination is a much more efficient and morally justified means of international policy than war. Assassinations are highly moral because they per se minimize the destruction done to human welfare. As well, assassinations are highly efficient, in that they frequently lead to favorable changes in policy, as seen from the perspective of the assassinating nation. Moreover, they are inexpensive in contrast to policing actions or formal wars, and have fewer negative international repercussions. Violence itself should remain the last resort for democratic states, but when democracies must engage in violence, assassination should be their primary option, not their last resort.