Choosers CAN be Beggars: What 20 Years of Democratic Politics Has Not Changed in Brazil's Urban Slums 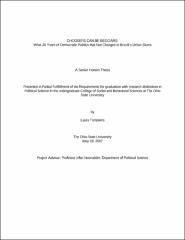 Does democracy actually improve the lives of underprivileged citizens? Starting with a definition of democracy as a particular set of organizing principles for political bargaining, this thesis tracks the condition of Brazil's urban slums from the authoritarian period beginning in 1964 to present. Before the democratic transition, slums were ignored or evicted by the authoritarian regime. The introduction of democracy has changed the nature of urban political bargaining but not its substantive outcomes. Clientelistic relations of unequal exchange with political elites have won sporadic improvements in public services, but slums are often equally likely to face new forms of state violence just as harsh as the old. The study concludes that the inherent limits of liberal democracy give no guarantee that it can bring improvements to the lives of the most underprivileged citizens.