Army women's reasons for not using condoms in relationships 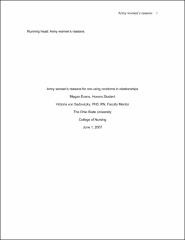 Purpose: The purpose of this secondary analysis was two-fold: 1) to examine condom use practices among military women; and 2) to compare their reasons for condom use and disuse based on relationship status. Background: Sexually transmitted infections (STIs) are at pandemic proportions globally. Women are disproportionately affected both in incidence of STIs and in developing complications from these infections. Military women are a special sub-population of women in relation to STIs. The incidence of STIs is four times higher in military populations than civilian populations. Little is known about military women’s use of condoms, which could protect them from contracting STIs. Subjects: Army women (N=131) from military posts around the country participated in this study. They ranged in age from 18-68 years (M = 29.5, SD = 14.4). The sample was of mixed ethnicity (Caucasian 52.5%). The average age of vaginal sexual debut was 17 years (SD = 2.5) with an average lifetime number of vaginal sexual partners of 9 (SD = 8.8). Women were divided into two subgroups. The first consisted of women who were either married or in an ongoing relationship (n=97) and the second group was either single or divorced (n=30). The average number of sexual partners in the past year from married/ongoing relationship women was 1.43 (SD=1.6) and 2.3 (SD = 2.3) for single/divorced women. Methods: After IRB approval, questionnaires were distributed to Army posts around the country. Women returned the questionnaires directly to the PI of the primary study. No identifying information was taken on the questionnaires. Participants completed a series of open-and closed-ended questions regarding condom use practices and reasons for condom use and disuse. Closed-ended questions were analyzed with descriptive statistics and open-ended responses were content analyzed (McLaughlin & Marascuilo, 1990). Nonparametric statistics and t-tests were used to examine differences. Results: Women rated their general use of condoms (scale 0 (never) – 4 (all the time) for vaginal sex at 1.8 (SD = 1.5) in the married/ongoing relationship group and 2.7 (SD = 1.2) in the single/divorced group. A greater number of women used condoms with the last casual partner (50.8% married/ongoing relationship and 73.1% single/divorced) than with the last regular partner (21.5% married/ongoing relationship and 39.3% single/divorced). Single women were significantly less likely to use condoms during vaginal sex (p = .003), have more anal sex partners (p = .01), more likely to use condoms during anal sex (p = .01), and have more casual sex partners (p = .04) than married/ongoing relationship women. Reasons why married/ongoing relationship women did not use condoms included having the same partner (79.7%) and using other forms of birth control (18.6%). Reasons why single/divorced women did not use condoms included having the same partner (41.7%) and abstinence from sex (33.3%). The most often cited reasons for using condoms between the groups was contraception (married/ongoing = 68.0%; single/divorced = 23.1%) and protection from STIs (married/ongoing = 36.0%; single/divorced = 61.5%). Conclusions: Results can help practitioners tailor current education programs to the needs of this population.