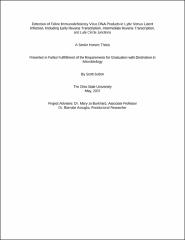 Human immunodeficiency virus type 1 (HIV-1) and other lentiviruses have developed latency as one mechanism to evade the host immune response. As a consequence, a subset of these viruses life-long latency, effectively preventing the eradication of HIV-1 infection. Two types of latency have been proposed: pre-integration and post-integration latency. In pre-integration latency, the pre-integration complex (PIC) composed of newly formed viral DNA, integrase, Vpr, and matrix protein, is prevented from entering the nucleus by host cellular factors. In post-integration latency, the PIC migrates to the nucleus and integrates into the genomic DNA, where it remains as dormant provirus for an indefinite period of time. We recently reported that mucosal administration of low dose cell-associated feline immunodeficiency virus (FIV) (102 and 103 infected cells) promotes viral latency in peripheral blood mononuclear cells (PBMC) and tissue lymphocytes that can be reactivated by in vitro cell stimulation. The current study investigates the type of infection occurring in high- or low-dose cell-associated FIV groups using polymerase chain reaction (PCR). Blood and tissue samples were analyzed for three different DNA products of FIV infection. Early stage products of reverse transcriptase (163 bp), intermediate stage products (542 bp), as well as late circle junction products (967 bp) of FIV were seen in high-dose groups (104~106 infected cells) whereas early reverse transcription products were the only, or primary, form detected in low-dose groups (102~103 infected cells). This is consistent with the development of viral latency in cats challenged with low numbers of infected cells. Because we identified early transcripts in samples from latently infected cats, our findings support one of two theories. (1) Transport of the pre-integration complex into the nucleus is inhibited resulting in pre-integration latency. (2) Late transcription is impaired resulting in post-integration latency. Our data provides evidence that latent infection occurs following mucosal exposure to low-dose FIV and raises the concern that some individuals exposed to low amounts of HIV may also become latently infected. This work helps to focus further investigations into the mechanisms of lentiviral latency.