From Society Hill to Weinland Park: Assessing the Changing City Role in Gentrification 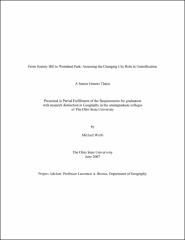 From initial curiosity and empirical observations to theorizing and pragmatic assessments, gentrification B the phenomenon of middle-class reinvestment in downtrodden inner-city housing B has long served as a focal point of scholarship and debate in urban geography. However, despite fifty years of study, gentrification research has largely minimized the role of an ever-important actor: local governments and their affiliated planners. This project examines the changing role of local governments in fomenting gentrification. I advance the hypothesis that the greater city role has arisen from the rise of neighborhood planning and the decline of the Keynesian protectionist state. Analysis begins by evaluating the history of local government involvement in urban revitalization. The research then turns to a case study of Weinland Park, a University District neighborhood undergoing changes that suggest revitalization in the near future. Activity in Weinland Park illustrates the rise of gentrification as an accepted planning method of both city planners and the non-profit community in revitalizing urban neighborhoods. Research methods employed include both quantitative and qualitative analysis. Demographic data, provided by the US Census, county auditor, and local development department, is analyzed to contrast today=s revitalizing neighborhoods with previous gentrification projects. Protocol-based, IRB-approved interviews with key informants provide on-the-ground context for understanding the role of local government. While Hackworth and Smith (2001) assign a temporal classification scheme to the city role, evidence from Columbus indicates that not all neighborhoods experience the same city involvement. In particular, spillover gentrification seems to warrant less city attention than revitalization in more-outlying areas. This research shows that local governments are undertaking an increasingly large role in facilitating gentrification processes. Evidence demonstrates that municipalities are working hand-in-hand with developers to identify potential redevelopment opportunities, enacting creative finance regimes to encourage speculation in inner-city neighborhoods, and stimulating commercial investments that appeal to potential gentrifiers. However, research also indicates that numerous programs are available to both the city and the non-profit community that can mitigate the negative effects of gentrification (ie, involuntary displacement). The essay concludes with an evaluation of these efforts and a normative argument on the most judicious city role.