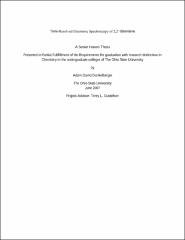 The model polyene, diphenylbutadiene (DPB), exhibits two closely-spaced first and second electronic excited states. The excited state lifetime of DPB varies significantly with solvent. To probe these excited states, ultrafast laser spectroscopy techniques, such as femtosecond transient absorption, must be used. Our goal is to better understand how structure and solvent effects affect the excited states. The understanding we gain can then be further applied to more complex, highly chiral molecules that may have interesting opto-electronic applications. At the present time, my research focuses on synthesizing rotationally constrained DPB analogues. There are three axes about which DPB can undergo intramolecular rotation, two of which are equivalent. Two molecules have been targeted for synthesis and analysis: 2,2’-bisindene, in which rotation about the two phenyl bonds is restricted, and [(3E)-3-benzylidenecyclopent-1-en-1-yl] benzene, in which rotation about the central single bond of the butadiene chain is restricted. My work has focused on 2,2’-bisindene. The synthesis of 2,2’-bisindene appears once in literature and is obtained through a Grignard self-coupling of 2-bromoindene. The synthesis of 2,2’-bisindene proved much more difficult than expected. The precursor, 2-bromoindene, is obtained by acid catalyzed dehydration of 2-bromoindanol. Successful isolation of the 2-bromoindene required an adaptation of several techniques used in the literature. Through further adaptation of literature methods, I was able to synthesize pure 2,2’-bisindene in sufficient quantity and purity for spectroscopic analysis. I have obtained various steady-state and time-resolved electronic spectra of 2,2’-bisindene and compared them to literature results for DPB.

The Camille and Henry Dreyfus Foundation