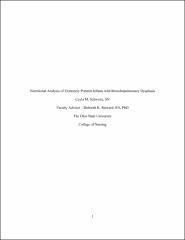 Background: With the increasing numbers of preterm births and the increased survival rates of those infants born extremely preterm (before 29 weeks gestation) come many potential chronic complications, including Bronchopulmonary Dysplasia (BPD). BPD is a chronic lung disorder resulting in reliance on prolonged use of supplemental oxygen. Because extremely preterm infants are born before lung development is comlpete, lung development must continue in the extra-unterine environment. The use of mechanical ventilation and oxygen causes damage to the inmature lungs and disrupts the developmental process. Researchers have demonstrated that BPD has a significant impact on the growth pattern of affected premature infants that persists into early childhood. Several factors contribute to this growth failure, most predominately undernutrition. Becasue these infants begin life acutely ill, adequate nutritional intake is often delayed until they become medically stable. Unfortunately, due to the numerous other complications and morbidities that are unique to preterm infatns, maintaining adequate nutritional intake is difficult. Ulitmately, growth is compromised in preterm infants developing BPD and undernutrition most likely enhances the development of BPD. Increased caloric and protein intake are most beneficial to these infants and yet researchers have shown that at discharge few infants are receiving the recommended levels of these nutrients. Purpose: The purpose of this study was to analyze the caloric and protein composition of nutrition provided to preterm infants with BPD in relation to recommended levels of these nutrients for healthy preterm infants as well as those with BPD. In addition, growth patterns were examined in relation to nutritional intake. Research Methods: Extremely preterm infants on mechanical ventilation and/or supplemental oxygen at 28 days of life were recruited from the neonatal intensive care unit (NICU) at The Ohio State Universtiy Medical Center. Daily nutritional intake and weights were obtained from the infant's medical record. Data were obtained from 28 days of life until the infant reached 36 weeks post-conceptional age. Using NEONOVA®, nutritional software specifically designed to analyze nutritional intake of infants in the NICU, obtained nutritional intake was analyzed for caloric and protein composition. In addition, cumulative caloric and protein deficits will be calculated. Overall growth velocities will be calculated from the daily weights. Findings: It was evident that these extremely premterm infants with BPD are not receiving the standard recommended nutrient intake for preterm infants, nor the recommendations for infants with BPD, for both caloric and protein intake. They were consistently across the gestational age groups below the recommnded daily values, resulting in significant cumulative deficits. In this study these infants came in with a deficit from the first 28 days of life, and that deficit only continued to progress throughout their hospitalization to 36 weeks PCA.