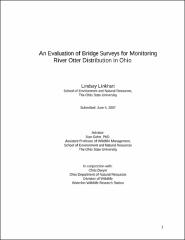 River otters (Lontra canadensis) were once prevalent in the landscape of North America, but were trapped to low population numbers by the early 1900’s. Seventeen states and one Canadian province (Alberta) have successfully reintroduced river otters to their historical habitat. Biologists have carefully monitored the distribution and abundance of populations through the use of bridge surveys, public observation reports, snow-track surveys, and reports of road kill and incidentally trapped otters. Bridge surveys are the most common type of survey and are conducted at randomly generated sites once a year. This study looked at whether repeated visits would provide more data and therefore a better indicator of distribution and abundance of the river otter population in Ohio. Results showed an increase in sign presence detected on day 2 from day 1, but no increase in detection on day 3 from what was previously detected on days 1 and 2.

In conjunction with the Ohio Department of Natural Resources, Division of Wildlife