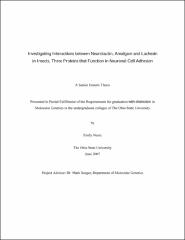 Neurotactin (Nrt) is a transmembrane protein that interacts with Amalgam (Ama), a secreted protein, to promote cell:cell adhesion during nervous system development in Drosophila. The Ama/Nrt cell adhesion process has been shown to be involved in axon-pathfinding. Lachesin (Lac), another cell surface protein, may also play a role in Drosophila neurite outgrowth. Lac and Ama proteins are very similar in structure. Both consist of a signal sequence followed by one variable and two constant immunoglobulin domains and are 58% similar in amino acid sequence. A critical difference is that the Lac protein is linked to cell membranes by a phosphatidylinositol anchor as opposed to the secreted Ama protein. Functions of Ama and Lac in neuronal development are still rather unclear. However, it is clear that Ama binds to Nrt and that this binding allows Nrt-expressing cells to aggregate. To characterize potential Lac interactions with Ama and Nrt, a series of experiments was performed. The Lac gene was cloned from the Drosophila genome. Using in vitro mutagenesis, a new version of the Lac gene was created without the sequence coding for the membrane anchor to produce a secreted version of the Lac protein. To test the functional properties of Lac and secreted Lac (Lac sec) I utilized the S2 cell aggregation assay. Drosophila Schneider 2 (S2) cells normally exist as individual cells in suspension. However, if manipulated to express cell adhesion molecules, the S2 cells can form significant multicellular aggregates. Therefore, Drosophila S2 cells provide a perfect model with which to assay the ability of Lac to promote cell adhesion. Results confirmed previous findings that the secreted version of Ama binds to Nrt to form cellular aggregates. Also in agreement with past findings, Ama and Lac were able to act individually as homophilic cell adhesion molecules. Both were able to induce homophilic aggregates, which served as a control for Ama and Lac protein production. S2 cells expressing the membrane-bound version of Lac and cells expressing Nrt were combined and assayed for cell aggregation activity. No mixed aggregates were observed which could indicate an inability of the Lac protein to bind to Nrt. The secreted version of Lac was also assayed for the ability to promote aggregation of Nrt-expressing cells. When Lac sec protein was added to media with Nrt-expressing S2 cells no significant multicellular aggregates were observed suggesting that the difference in amino acid sequence of the Ama protein compared to the Lac accounts for different Nrt-binding properties. To identify Ama sequences that confer the specificity of the Ama:Nrt interaction as well as Ama:Ama and Lac:Lac interactions, chimeric Ama-Lac genes were generated. In the future these chimeric proteins will be tested in the S2 cell assay for their different binding properties. A new system for positive selection of transfected cells was tested and proven effective in the course of these experiments. This process utilizes resistance to the antibiotic Hygromycin B and is more advantageous than previous approaches used in the Seeger Lab due to the minimal cost of Hygromycin B. Advisor: Mark Seeger