Establishment of a tRNA over-expression system in Trypanosoma brucei to study the role of post-transcriptional modifications on function. 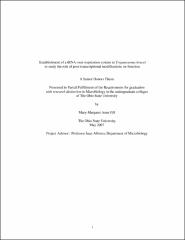 Trypanosomatids are parasitic protozoa which infect millions of humans and animals across the globe every year. The two primary types of these unicellular flagellates are Trypanosoma and Leishmania, and the World Health Organization estimates that approximately 400 million people worldwide are at substantial risk to develop infections caused by these pathogens. Trypanosomes also possess many significant biological and biochemical properties, and in particular the tRNAs of trypanosomatids undergo substantial in vivo chemical modifications. We focus on understanding how one particular set of modifications, i.e. adenosine to inosine changes in the anticodon, impact tRNA function. We are also interested on how other modifications like methylations may affect inosine formation. The goals of this project are two-fold: first, to construct a vector capable of successfully over-expressing tRNA in Trypanosoma brucei, and second, to successfully introduce two non-endogenous, tagged tRNAs into T. brucei in order to further analyze in vivo modifications. To this end, we have engineered two distinct tRNA variants with mutations in the anticodon arm (Tag 22) and anticodon arm and loop (Tag 23). These mutations serve as tags to differentiate them from endogenous tRNAs naturally found in T. brucei cells. Prior to testing our overexpression system, the two "tagged" variants were analyzed for their ability to support known modification reactions in vitro. Since these variants are derived from a tRNA that undergoes adenosine to inosine changes in their anticodon in vivo, we tested and further showed that the mutations used to generate the variants do not interfere with this reaction in vitro. In the next phase of the project, the two variants will be cloned in a plasmid vector and expressed under the control of an endogenous T7 promoter and tetracycline (TET) operator, followed by transfection into Trypanosoma brucei cells. Total RNA isolated from the transfected cells will thus provide a measure of overexpression of our two tRNA variants. Successful completion of this phase of the project will allow further exploration into the in vivo posttranscriptional modifications of tRNAs through analysis of the tagged tRNA constructs. By comparing the tagged tRNA construct to endogenous tRNAs, important modification reactions such as adenosine to inosine and cytidine to uridine editing can be further studied. As mentioned earlier, since these modifications play a vital role in the function of tRNA, their identification could be useful for future design of anti-trypanosomal treatments.