A Network of Assurance and Security: The Evolving Role of Clans in Somali Society 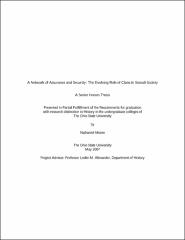 Clans have existed in Somalia since people first began to settle there and have served as an integral part of Somali culture and society functioning as an extended network of kinship and assistance. Firstly with the arrival of Europeans who forced a Western-style centralized government, and furthermore with the dictatorship of Siad Barre and his involvement in Cold War politics; clans in Somalia evolved into divided warring faction all competing for power, evidenced by 15 years of civil war. However, the refugees who fled Somalia serve as a universal model for unity and willingness to aid other Somalis regardless of clan, completely contrasting with the violent clan conflict in Somalia. The evolution of Somali clans from a traditional model of kinship to the power hungry militias that exist today was fueled by misguided European policies, Cold War politics and the poor governance and tribalism of Siad Barre. However, when freed from the confines of perpetual civil war, the traditional model of clans returns to Somali refugees demonstrating the fluid restrictions of the concept of clan and a hope that Somalis can unify their country and end the civil war. By developing an understanding of the evolution of the Somali clan system, not only can one become informed of the current difficulties in nation building but hopefully influence the creation of an unified Somalia which would allow for clans to shed their current image of violent militias bent on gaining power and resume their former significance in Somali society. By combining an array of secondary sources analyzing clans through the history of Somalia and personal interviews with Somalis living in Columbus, I was able to collect information on the evolution of the clan system in Somalia, and the manner that clan identity manifests itself in America.