Purification and characterization of novel X and Y-family DNA polymerases 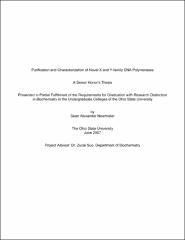 DNA polymerases are known to be responsible for the replication and maintenance of an organism’s genomic DNA. However, with the completion of the human genome project, roughly ten additional DNA polymerases have been identified, and in many cases the physiological role of these novel enzymes remains to be elucidated. DNA polymerase lambda (Pol λ) is one such enzyme, and while it shares 54% sequence homology with the well-characterized DNA polymerase beta (Pol β), both genetic and biochemical evidence suggest a more complex physiological role for Pol λ. Pol λ demonstrates biochemical properties that are unprecedented in all characterized DNA polymerases with the most notable being the tight binding of all correct and incorrect canonical deoxynucleoside triphosphates (dNTP’s). DNA polymerases commonly demonstrate a preference for the “correct” incoming nucleotide by a significantly tighter binding of that nucleotide which results in a correct incorporation. Pol λ, however, binds all possible incoming nucleotides with a similar and tight ground-state binding affinity. By examining the crystal structure of truncated Pol λ several active site residues potentially involved in nucleotide binding were identified. Then, using site-directed mutagenesis, a series of mutant enzymes were generated to probe the structural basis of this phenomenon. Finally, pre-steady-state kinetics were employed to measure the ground state binding affinity for correct and incorrect incoming nucleotides in each of these mutant enzymes. Our results indicate that multiple amino acid residues are responsible for tight nucleotide binding in Pol λ. Residue R386 stabilizes the incoming nucleotide by salt bridge formation between the gamma phosphate of the nucleotide and the positively-charged guanidinium group on arginine, while residues A510 and R514 participate in van der Waal’s interactions with the base and sugar of the incoming nucleotide. Advisor: Zucai Suo