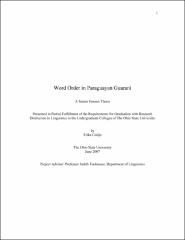 My honors research project examines word order in Paraguayan Guaraní, i.e. the order in which the subject, object, and verb of a sentence are realized. No study of word order has been conducted on Paraguayan Guaraní, and my quantitative study brings Guaraní to bear on cross-linguistic studies of word order. The main research questions I am pursuing are: What word orders are possible in Guaraní and is there a basic word order? Do the factors of grammatical function, animacy, and discourse status affect the placement of arguments? If so, how? Knowledge of the basic word order of a language is important because it has been found to correlate with other grammatical properties of the language. For example, linguists have observed that there is a relation between basic word order and other properties like the position of adjectives relative to the noun and the type of adposition a language will have: verb-initial languages generally have prepositions, while verb-final languages generally have post-positions. Grammatical function, animacy, and discourse status have been shown in previous studies to influence the realization of word order. English word order, for example, is strongly constrained by grammatical function; the subject typically comes before the verb, while the object normally follows. In Tojolobal, a Mayan language, word order is influenced by animacy. Of the six possible word orders, there are several that are possible only if certain arguments have a certain type of animacy, such as human or animal. Discourse status, which we measure by looking at definiteness, has also been found to constrain word order. Cayuga, an Iroquoian language, has been shown to realize indefinite noun phrases before definite noun phrases. This quantitative study overall finds Subject-Verb-Object to be the basic word order of Paraguayan Guaraní, based on the criteria of frequency and disambiguation. I also find that grammatical function and discourse status affect the placement of arguments, while animacy by itself is not much of an influence. When paired together, however, discourse status and animacy do affect the realization of subjects in Paraguayan Guaraní.