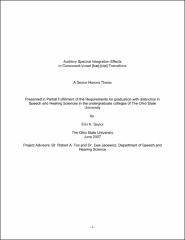 In speech, perceptual distinctions among consonants are typically made on the basis of formant transitions, or frequency changes in vocal resonances as voicing moves from consonant to vowel production. Previous studies have shown that these distinctions can be made whether frequency transitions are “real” or “virtual.” A real formant transition is an actual change or movement in frequency to or from the steady state vowel portion. A virtual transition refers to a change to the spectral Center-of-Gravity (COG), which can also be used to simulate formant transitions in consonants. Fox et al. (2007) demonstrated excellent identification along a /da-ga/ continuum using these simulated formant transitions. However, one important unanswered question is the level at which these formant transitions are processed. Are they processed peripherally by the cochlea or are they mediated more centrally by higher auditory structures? Two projects underway at The Ohio State University address this question. One project (Wackler, 2007) uses the same /da-ga/ continuum but presents the stimuli dichotically-- the consonant transition is presented in the left ear and the remainder of the stimulus is presented in the right ear, requiring central mediation in the identification task. The present study utilized a /bæ-dæ/ continuum, also presented in a dichotic paradigm. The difference in consonant continuum is important because the relevant information for distinguishing /bæ/ from /dæ/ is located at the F2 transition, as compared to the F3 transition for /da-ga/; in /bæ-dæ/, additional formants such as F3 do not carry information necessary for sound discrimination. The stimuli in the present study were constructed using only F1 and F2 components. Twelve normal hearing adults (three males and nine females) between the ages of 20-27 participated in the study. They were asked to identify speech sounds in the /bæ-dæ/ continuum under four conditions: diotic synthetic speech, dichotic synthesized speech, diotic virtual speech and dichotic virtual speech signals. Preliminary studies, Wackler (2007) and the present [bæ]-[dæ] research, have shown parallel results demonstrated by Fox et al. (2007). A substantial number of subjects had a more difficult time discriminating virtual speech tokens in the dichotic condition while performance for synthetic speech tokens was similar for diotic and dichotic presentation. These results suggest that the COG formant transition may be as not salient in the second formant position, the presence of F3 information may provide additional spectral richness beneficial for discrimination and lastly, parameters of the stimuli such as intensity need to be further analyzed. Future studies will address these possibilities in order to clarify the nature of peripheral vs. central processing of virtual formant transitions. Results have implications for the development of improved cochlear implants for hearing-impaired persons.