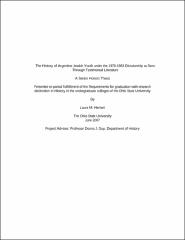 From 1976 to 1983, the military dictatorship that controlled Argentina secretly kidnapped and tortured thousands of citizens for their alleged participation in subversive, anti-government activity. Among the most targeted populations were intellectuals, progressive political activists, young people, and Jews. Following the fall of the dictatorship, many survivors recorded their experiences in a unique literary style known as testimonio. While testimonio’s unique narrative structure and communal voice have been thoroughly examined by literary scholars, its historical context remains unstudied. This project begins to address this lack of historical context by exploring a specific set of testimonios. Testimonio was particularly popular among Jewish survivors, many of whom foreground their Jewish ethnicity in their work. I intend to explore what it meant to be young and Jewish during and shortly before the military dictatorship in order to provide an enhanced understanding of references to Judaism in testimonial works. The study draws on four sets of documents. Official publications from institutions within the Jewish community, such as magazines and newspapers, were used to trace how youth participation in Jewish institutions and Zionist views shifted from the onset of Peronism to the end of the dictatorship. Memoirs, autobiographies and testimonios supplemented these accounts and provided insights about non-institutional views and participation. Institutional histories of major Jewish organizations and political histories about the relationship between Argentina's Jewish and gentile population established both internal and external political dynamics, particularly those related to Zionism and anti-Semitism. Last, broader studies of the dictatorship, particularly the nationally sponsored report on disappeared persons, Nunca Más, situated the Jewish experience in a larger, national context. Three working hypotheses have emerged. First, the institutional Jewish community, which traditionally focused on immigrant aid, was de-centered by declining Jewish immigration to Argentina in the second half of the 20th century. Its focus shifted during this period to Zionism and the public image of the Jewish community was dominated by this focus, Jewish young adults kidnapped during the 1976-1983 dictatorship grew up in a gentile society that largely equated Zionism with Judaism. Second, Zionism was an extremely divisive issue within the Jewish community and non-Zionist Jews were alienated and excluded from traditional, dominant institutions. This isolated many secular Jews (those who identified with the Jewish community ethnically and culturally but not religiously), particularly left leaning young people associated with socialist parties, from the religious Jewish community. Last, anti-Semitism did not impinge on the Jewish community uniformly. The dictatorship targeted young, leftist Jews as subversives by virtue of both their social activities and their Jewish heritage. While, their Jewish identity made them more vulnerable to government-sponsored kidnappings, their leftist identities, particularly in the case of Marxists, made protection from the Institutional Argentine Jewish community less accessible because they were suspected of being anti-Zionists.