Is Pessimism Adaptive? Moderators of the relationship between Optimistic / Pessimistic Bias and Depressive Symptoms 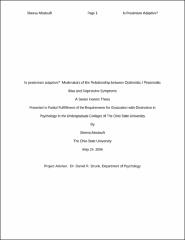