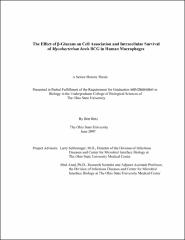 In 2004 there were an estimated 1.7 million deaths from tuberculosis (TB). Due to improper use of antibiotics, many drug resistant forms of Mycobacterium tuberculosis (M.tb), the causative agent of TB, have risen around the world, making this disease a leading cause of death among infectious disease agents. M.tb remains dormant in healthy hosts and becomes active when the immune system is weakened. The bacterium is an intracellular pathogen of macrophages. M.tb uses complement receptor 3 (CR3), among others, for complement-opsonized and non-opsonized phagocytosis by human macrophages and evades host defenses by replicating intracellularly in the phagosome. The polysaccharide β-glucan has been found to competitively inhibit binding to CR3 by incoming pathogens and allows for their clearance through other mechanisms. For example, it has been shown to up-regulate the production of pro-inflammatory cytokines and promote both anti-microbial and anti-tumor activities, most likely through its binding to the β-glucan receptor, Dectin-1, expressed on host macrophages. Because of its effects on CR3 and the innate immune response, we hypothesize that β-glucans would enhance activity against M.tb by inhibiting CR3-mediated phagocytosis and up-regulating human macrophage microbicidal activities. The effects of β-glucans were tested on human monocyte-derived macrophages (MDMs) which were obtained by allowing differentiation of blood monocytes isolated from healthy donors. The MDMs in monolayer culture were infected with the attenuated Mycobacterium bovis BCG (vaccine strain), a highly genetically-related model bacterium to M.tb, in the presence or absence of different β-glucan preparations [PGG (soluble) and WGP (insoluble)] supplied from Biothera (Eagan, Minnesota). After a 2 h infection, the infected cell monolayers were fixed and mycobacteria were stained with auramine-rhodamine dye to assess bacterial association (bound and internalized) with macrophages by fluorescence microscopy. Alternatively, following infection, the MDMs were lysed at different time points (24 h, 48 h, 72 h), the lysates spread on agar plates for bacterial growth, and colony forming units (CFUs) determined to assess bacterial intracellular survival. This in vitro study produced preliminary results showing an antimicrobial effect by β-glucans against M. bovis BCG in MDMs as demonstrated by both bacterial survival and cell association assays. This preliminary study shows that β-glucans may possess therapeutic potential to treat TB infection.