Moderators of the Relationship between Cognitive Bias and Depressive Symptoms 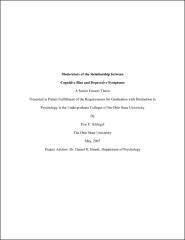