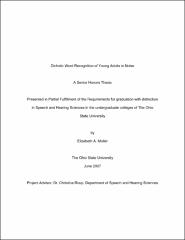 Dichotic word recognition (DWR) was measured in both quiet and noise among young adults with normal hearing. In the noise condition, performance was reduced until it equaled that of older adults with hearing loss (e.g., Roup et al., 2006). Differences in performance between ears [i.e., the right ear advantage (REA)] were compared between both dichotic conditions (quiet and noise). Despite the introduction of noise and the subsequent increased difficulty of the task, the mean REA in the noise condition remained small. Further, no significant differences were exhibited between mean REAs in quiet and noise. Mean REAs from the noise condition were then compared to previously collected dichotic word recognition data from older adults with sensorineural hearing loss. Overall performance was comparable between the two groups; however, the young adults exhibited much smaller mean REAs. The fact that the REAs of the young adult subjects were not significant in the presence of increased difficulty (e.g., noise) lends support to the suggested hypothesis that the disproportionately large REAs exhibited by older adults reflect changes in auditory processing rather than the effects of peripheral hearing loss.