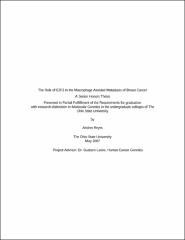 Many studies have shown that macrophages play a critical role in metastasis within the tumor microenvironment. The aim of this study was to shed more light on the particular role of macrophages, and how the cell cycle transcription factor E2F3 affects tumor development and tumor metastasis. MMTV-PyMT was used to induce tumors in the mammary glands of female mice. It has been shown that Lys cre is very effective at specifically deleting genes in the macrophages. Lys cre was used to knock out the floxed E2F3 allele in the macrophages of these PyMT mice. E2F3 PCR was used to confirm that the Lys cre was working at an effective level in terms of deletion efficiency. Three groups of mice were generated from the breeding scheme. There was the control group (E2F3+/loxp - cre), the conditional group (E2F3+/loxp + cre), and the homozygous group (E2F3loxp/loxp + cre). Tumor onset in the PyMT mice population was on average 80.2 days. After 110 days, the mice were harvested and their tumors and lungs removed for analysis. The analysis of the tumors showed that the three groups of mice had very similar tumor burden and dimensions. However, the analysis of the lungs showed more then a three fold difference in total area of metastasis between the +/loxP -cre and +/loxP +cre groups. Advisor: Gustavo Leone