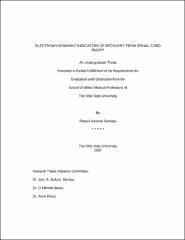 Spinal cord injury (SCI) impairs locomotion and therefore diminishes quality of life. In the US, 11,000 new cases annually yield 175,000 to 275,000 people living with SCI. Many studies analyze recovery from SCI employing behavioral and anatomical measurements, but few measure muscle activity with electromyography (EMG) in the rat, the species most used for SCI research. EMG can measure muscle recruitment patterns as an indication of the organization of motor control patterns for locomotion. The purpose of this study was to analyze the changes in muscle activation of selected hindlimb muscles, determine which muscles best indicated differences between rats with mild SCI and normal rats, and determine which changes in EMG parameters best reflected the time course of recovery in the SCI rats. Ten female Sprague Dawley rats were trained for three weeks to walk on a treadmill. Intramuscular EMG electrodes were implanted in the left hindlimb of four muscles per rat, including tibialis anterior (ankle flexor), lateral gastrocnemius (ankle extensor), gluteus medius (hip extensor/abductor) or sartorius (hip flexor/knee extensor), and semitendinosus (knee flexor/hip extensor). These muscles were studied for their unique EMG locomotor recruitment patterns based on previous studies in rats and in humans. As the subjects resumed treadmill training, EMG data were collected as a baseline. A mild spinal cord injury on the thoracic level was performed on half of the subjects. A standardized behavioral scale for quality of walking, the BBB Locomotor Rating Scale, was administered pre-injury and at 1, 7, 14, and 21 days after injury. Throughout three weeks of recovery, treadmill walking and EMG recording continued 4 – 5 days per week. Average EMG patterns for ~50 – 150 steps per session were constructed from around the time of stance onset. Time latencies of EMG onset and offset, with respect to stance onset, along with EMG duration were analyzed for each step. Four of the ten rats, two controls and two SCI, had high-quality recordings throughout the six week study for 3 – 4 of the muscles implanted; data from these subjects were the focus of analysis. The averaged EMG patterns suggested that SCI rats had increased overlap of activity between normally reciprocal muscles at the ankle. However, after statistical analysis this finding was not significant. Variation in latency for EMG onset time with respect to stance onset was higher for SCI rats than for normal rats after injury, indicating more variable timing of muscle recruitment. This was related to the significantly shorter swing duration in SCI rats. Recruitment patterns of multifunctional muscles showed the most apparent change after SCI, but returned towards normal after training. In parallel with the improved EMG recruitment patterns, BBB score also improved with the 3-weeks of training after SCI, as expected. However, some aspects of EMG analysis were independent of BBB scores. These results show that changes in EMG during walking can be observed after SCI and return towards normal are evident during recovery. EMG is uniquely able to reveal changes in muscle recruitment patterns that may underlie changes in walking behavior after SCI, and as such offers a window into functional mechanisms of recovery.