The Old English Demonstrative: A Synchronic and Diachronic Investigation 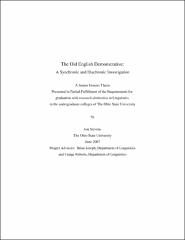 David Lewis once stated that if we want to know what meanings are, we need to find out what meanings do. Upon examining what the Old English se paradigm is doing, one will see that definiteness, as it is defined in Modern English, does not exist in that language, inviting the question: how did definiteness arise? Scholars have identified the overlap in function between demonstratives and definites as being a crucial part of the story, but few have tried to analyze the change with formal tools. The informational uniqueness theory of definites in English (Roberts 2002, 2003) formalizes the overlap in function via a shared presupposition. I argue that the se paradigm in Old English is much like the Modern English demonstrative that, but with a few added functions. I then show that by treating the OE demonstrative as requiring a uniqueness presupposition similar to that of its MnE counterpart, the development of definiteness can be outlined in terms invited inferencing (Traugott and Dasher 2005). This account provides pragmatic motivation for the change, rather than suggesting that it is part of a deterministic grammaticalization process.