Improving the Efficiency of Liquid Feed Use in Dairy Rations 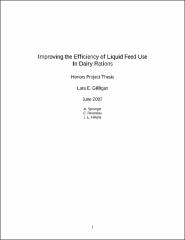 Milk production and milk fat synthesis depend much upon the provision of adequate energy to the cow. Non-fiber carbohydrates (NFC) from cereal grains are used in the dairy industry as the main way to provide increased energy to the animal. Liquid feeds (LF) are NFC byproducts from food processing. The LF used in this study was Quality Liquid Feed’s TMR 20, which is made from molasses (from sugar processing), corn steep liquor (from wet milling of corn for sweeteners) and whey (from cheese manufacturing). LF also helps reduce sorting behavior and increase palatability of feeds. The excess sugars found in LF provide more calories but can promote rumen acidosis. The low rumen pH associated with acidosis can inhibit fiber-degrading bacterial populations, decreasing digestibility and feed intake. To help prevent acidosis, farmers use Rumensin (R), an antibiotic ionophore that inhibits lactic acid-producing bacteria and makes feed conversion more efficient, but can inhibit milk fat through rumen metabolism. After approval of R for dairy rations, some farmers have noted that, when combined with diets containing rapidly available carbohydrates, it can depress milk fat concentration, which costs them considerable profit. The project objective was to investigate whether positive effects from feeding two concentrations of LF are more likely as rumen-available starch is diluted with soybean hulls and the presence of R. The different levels of LF and NFC help to pinpoint how and when sugar supplementation would be most effective. The hypothesis was sugar supplementation at a moderate level would prevent acidosis and improve digestive efficiency without depressing milk fat. To test this hypothesis, we measured total tract digestibility, milk fat production, volatile fatty acid (VFA) concentrations, and ruminal fermentation characteristics. This project consisted of a 5-cow digestibility trial within a larger, 60-cow production trial using five treatment diets. Cows were fed 1) control diet at 40% NFC, 2) 40% NFC + 3.25% LF, 3) 37% NFC + 3.25% LF, 4) 37% NFC + 6.25% LF or 5) 37% NFC + 6.25% LF + R. Two rumen-cannulated and three non-cannulated lactating Holstein cows were fed each of the treatment diets for five 4-week periods. Total tract digestibility was determined using Cr2O3 dosed into the rumen of the cannulated cows or from capsules for the non-cannulated cows. Rumen pH and VFAs were measured at 0, 3, 6 and 9 hours after feeding. The digestibility results showed no significant difference between treatments. Milk fat also showed no significant differences, meaning that R did not depress production. VFA total, acetate/proprionate ratio, and butyrate concentrations showed no treatment differences. Knowing how to formulate diets that contain R but do not depress milk fat or cause acidosis is valuable to the dairy industry. For an average milk production level, milk fat depression could decrease the cow’s profit potential by a third or more. LF provides a relatively cheap source of calories while stimulating or stabilizing total feed intake of mixed rations, which may help prevent milk fat depression and improve efficiency of feed conversion into milk components.