The effects of androgens on lymphocyte infiltration into the porcine endometrium 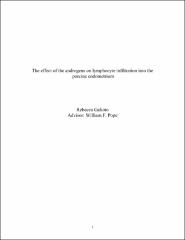 Litter size is an important aspect of the swine industry and sows are often genetically selected for large litter sizes because of the economic importance of such a trait. Finding alternate ways to influence the number of pigs born, in addition to genetic manipulation could be of economic value to producers. Androgens, including testosterone and dihydrotestosterone (DHT) are used to increase a sow’s ovulation rate to maximize litter size. However, these hormones can have a negative effect on the health of the sow’s uterus. When DHT was used in high dosages, the uterine contents were opaque and infected which suggests that the hormone negatively influences the lymphocyte infiltration during proestrus (Cardenas et al. 2002). When pigs mate, the uterine environment is exposed to a large amount of foreign material that can potentially cause serious infections and limit the uterus’ ability to support growing embryos. Because of the volume of the ejaculate and the length of the uterine horns, swine rely on the lymphocyte infiltration that occurs during the proestrus period to fight off foreign material and bacteria that can compromise uterine health. In order to examine the effect that androgens have on the lymphocyte infiltration into the porcine endometrium, twelve gilts were divided into six groups and treated with either testosterone, dihydrotestosterone, testosterone plus flutamide, DHT plus flutamide, flutamide or oil from day 13 to day 18 of the estrus cycle. Then the number of lymphocytes in a section of each uterine horn was quantified. The concentration of lymphocytes that were observed in the endometrium of the gilts treated with DHT was significantly lower than in the control group. This is consistent with the occurrence of uterine infections and may explain the prevalence of infection in gilts that are treated with DHT.