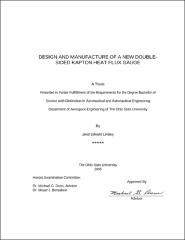 The measurement of Heat flux, or the flow of thermal energy, is a critical measurement for heat transfer analysis. In the case of axial flow turbines, the measurement of heat-flux is complicated by the high speed at which the turbo-machinery rotates. Additionally, because turbo-machinery utilizes fluid flow over a shaped body, it is important to not disrupt the air flow and boundary layer in the region of measurement to preserve the integrity of measured results. Because of these complications, heat flux gauges utilized in heat transfer studies of turbo-machinery must be critically designed to limit any disruptions caused by the instrumentation. Early heat flux gauges were placed inside a cavity machined into the airfoil in a way that made the edge flush so as not to disrupt the airflow. Today, however, with the advances in film-cooling now utilized in the gas-turbine industry, it is not possible to machine a pocket onto a shaped blade due to internal air passages which cool the blade from within before expelling the gas as a cooling jet around the outer surface of the blade. For this reason and because one needs both the front side and back side temperature history, the heat-flux gauge substrate must be incredibly thin and must have a carefully aligned sensor on each side. To this end, a series of double-sided heat flux gauges have been developed which satisfy the design criteria. The double-sided Kapton heat-flux gauge has allowed The Ohio State University (OSU) Gas Turbine Laboratory (GTL) to conduct research related to film effectiveness within film-cooled full-stage rotating high-pressure turbines. The first generation of this device developed at the OSU GTL for this purpose in the 1990’s and while effective had several design characteristics which proved difficult to manufacture consistently, including a fragile set of three masks used for the gauge design and a requirement to puncture the insulating material on which the gauges were placed. In time these features made gauge manufacture difficult due to the requirement that the front and back gauges be located precisely in line with each other (top to bottom), and greatly contributed to large gauge-to-gauge variation. A second-generation gauge was developed which would greatly decrease the variation among units. The new gauge incorporated a less fragile thermal resistor design to decrease destruction caused during cleaning, required only two masks, as well as a novel concept to complete the electrical circuit to the bottom gauge when it was not exposed, without requiring an altering of the insulating material integrity. The development of a new heat flux gauge, which is less than 0.0011-inches thick, provides only an extreme minimum of flow disruption while additionally satisfying requirements of decreased complexity of construction and decreasing gauge-to-gauge variation and will be implemented on upcoming turbine experiments.

Except where otherwise noted, this item's license is described as Attribution-NonCommercial-ShareAlike 2.0 Generic