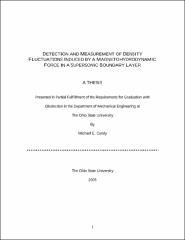 This project is producing experimental data which can define the influence of electro-magnetic fields on density fluctuations (turbulence) in a supersonic boundary layer. By investigating the behavior of density fluctuations in the boundary layer under certain conditions, this Air Force funded project will aid in the development of advanced supersonic vehicles. Experiments have been performed with nitrogen gas and air. First, gas is emitted into a M=3 wind tunnel and ionized using an RF power supply. A DC voltage is then applied to draw a transverse current in the flow. A 1.5 T magnetic field is crossed with the DC field, which results in the Lorentz force acting on the free electrons and the positive ions in the flow. The direction of the force can be upstream or downstream, depending on the experimental configuration. Inherent turbulence is modified in both conditions. An accelerating force has shown to reduce density fluctuations by 5-10%, while a decelerating force has shown to increase density fluctuations by approximately the same amount. Currently, experiments are being performed to determine the flow regime in order to supplement these results. A Laser Differential Interferometer (LDI), which I have constructed, is used to measure the density fluctuations. This device, in which a laser beam passing through the boundary layer (probe beam) is combined with a second laser beam passing through the free stream (reference beam), creates a time dependant interference signal which is a function of the average density difference between the two paths. The resulting experimental data is processed using Fourier Transform techniques.

This research has been supported by the AFOSR under grant F49620-02-1-0164, Phase II SBIR grant F33615-01-C-3112 of Air Vehicles Directorate of AFRL, and by the National Science Foundation (NSF) Division of Plasma Physics.