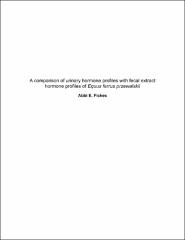 Przewalski’s horse (Equus ferrus Przewalski), is the last remaining cousin of the domestic horse. Due to hunting, habitat loss and severe weather, the wild population declined and was declared extinct in 1969. The current captive population was derived from only fourteen founders, which has resulted in reduced genetic diversity. A sound understanding of the Przewalski’s horse’s reproductive parameters is necessary in order to utilize artificial reproductive technologies as part of a captive breeding program. Reproductive hormone levels can be detected in urine, feces, saliva, and blood. In the Przewalski’s horse, urine hormone analysis is deemed the only noninvasive, accurate representation of hormone levels. However, urine collection can be problematic and time-consuming, making it difficult to acquire samples from other zoological institutions. If fecal hormone analyses were found to be an acceptable alternative to urine, more institutions may be willing to participate in studies. This would greatly expand the sample number and yield a more accurate synopsis of the Przewalski’s horse estrus cycle. The objective of this study was to determine whether feces could be used as an alternative to urine for the measure and analysis of the reproductive hormones pregnane (PG) and estrone conjugates (EC). Urine and fecal samples were collected from four Przewalski’s horse mares for a period of four weeks. Fecal samples were extracted using a boiling method and extraction efficiency was determined. Both urine and fecal samples were processed and then analyzed for PG and EC using a validated enzyme-linked immunosorbent assay procedure. Fecal samples from three of the mares were also analyzed for estradiol-17β (E2). Pearson correlation coefficient tests were run on the data to determine the relationship between urine and fecal EC levels (ECU vs. ECF), fecal and urine PG levels (PGF vs. PGU), and urine EC levels and fecal E2 levels (ECU vs. E2F). Statistically significant (α<0.01) correlations were found in the PGF vs. PGU analysis for each of the mares (n=4). No statistical significance was found for the remaining tests. The process of hormone extraction from feces used in this study appears to be adequate for PG analysis. However, this was not found to be an accurate representation of EC and E2 levels. Due to the small sample size, further research is necessary to determine whether adjustment of extraction or ELISA procedures could improve detection of estrogen levels in fecal samples from the Przewalski’s horse.