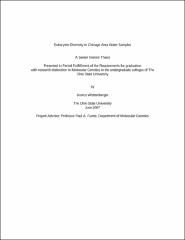 In the past two decades, there has been an increase in the number of Acanthamoeba keratitis infections reported both in the United States and globally. Acanthamoeba keratitis (AK) is a painful eye infection caused by the protist Acanthamoeba, which can result in blindness if not treated in a timely, effective manner. While the greater number of diagnosed cases is partially due to an increased awareness of the disease and its symptoms, geographic and demographic outbreaks have brought the members of the genus Acanthamoeba under severe scrutiny in the scientific community. In the laboratory of Dr. Paul Fuerst, Department of Evolution, Ecology, and Organismal Biology at the Ohio State University, projects are currently active to identify all eukaryotic organisms present in diverse water samples from several locales across the country where the occurrence of AK has been atypically high. The water samples analyzed in this study, obtained from the Chicago area, were screened for further microbial content following positive identification of Acanthamoeba in the sample. Similar previous studies of this nature have revealed a myriad of other microorganisms thriving in samples collected from treated water sources. Through the use of precise DNA treatment techniques, specifically PCR amplification of the small subunit rRNA gene followed by DNA sequencing of cloned amplification products, this screen identified the probable presence of the amoeba Hartmannella in all six Chicago area water samples with discernable sequence results. During this study, nine Chicago are water samples were analyzed. Eight contained DNA after the initial extraction and were then cloned to investigate the eukaryotic diversity present. There were a total of 62 readable sequences obtained, with 36 returning identifiable results when entered into NCBI BLAST search. The content of the examined Chicago water samples, beyond Acanthamoeba, appears to be predominantly the amoeba Hartmannella (97%), although there was one instance where the mold Amylomyces rouxii (3%) was identified as a possible sequence match.

Research completed in the laboratory of Dr. Paul A. Fuerst at the Ohio State University.