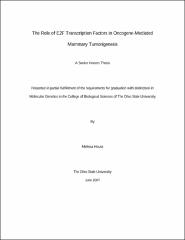 The Myc and Neu oncogenes are commonly amplified in breast cancer, and in order to determine their roles, one must study the pathways they regulate. It has been found that there may be a cross-regulatory relationship between Myc and Neu through the action of E2F transcription factors. Establishing and understanding any potential link between the Myc and Neu oncogenes would enhance our understanding of gene regulatory pathways in breast cancer, and possibly have clinical implications. Based largely on in-vitro studies, Myc had been previously suggested to act through a select number of E2F family members. Similarly, studies have also linked Neu to the action of the E2F pathway. In order to study the relevance of E2F transcription factors in these two pathways, I examined mammary tumor formation initiated by either the Myc and Neu oncogenes in mice deficient for the E2F1, E2F2, or E2F3 genes. Because there exists a high degree of functional redundancy, combinations of the E2Fs were also deleted. Development of glands deficient in the E2Fs as well as tumor start dates were examined in order to determine the contributions made by the specific E2Fs. It was found that E2F3 did not play a significant role in Myc-mediated tumorigenesis, but it did play a critical role in Neu-mediated tumorigenesis. E2Fs 1 and 2 had varying roles of importance between the two pathways, and even when mice were deficient for multiple E2Fs, tumorigenesis was able to occur. The data implies that the Rb-E2F pathway is only mildly involved in Myc-mediated mammary tumorigenesis, but that this pathway is more critical for Neu mediated tumorigenesis. This suggests that Myc most likely acts through several additional regulatory pathways, and Neu is dependent on the Cyclin D1-Rb E2F pathway.