From the Arrow to the Fish: The Architectural Thinking of Paul Klee 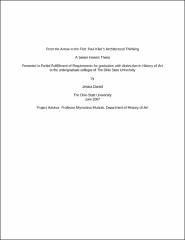 The Swiss artist Paul Klee (1879 – 1940) worked largely in paper, experimented with various techniques, and produced over ten thousand paintings. His works are dense with signs, letters, numbers, and motifs that are cryptic in nature yet, as I hope to show, comprise a lexicon of specific meaning. Three key groups of symbols (the arrow, the “blueprint” and the fish) have been narrowed to a body of works that Klee produced during his teaching at the German Bauhaus (1921-1931): the influential school created by Walter Gropius. The aim of my research is to explore how these symbols belong to Klee’s “architectural” turn of mind. While these symbols have been examined from the standpoint of primitivism (because of Klee’s cultivation of naïveté) as well as sophisticated methodologies involving structuralism and semiotics, my contention is that they are linked specifically to his pedagogy. My intent is to use Klee’s Bauhaus teachings found in his seminal publications, The Pedagogical Sketchbook (1925) and The Thinking Eye (1956), as well as paintings Klee completed while teaching at the Bauhaus, to better understand the use of specific symbols in his paintings. I am particularly concerned with examining how the dialogue between Gropius’ principles - that a combination of fine arts and applied arts should be reached resulting in the final product of architecture - inspired Klee to take a more architectural approach to painting. I hope to show that Klee’s paintings completed during his years at the Bauhaus express an interest in spatial concerns similar to those being explored by contemporary architects. My thesis provides a place for Klee within the context of the formation of modern architecture to which he has never been ascribed. As a painter who grappled with the same spatial concerns as contemporary architects at the Bauhaus, it seems reasonable and appropriate to examine him from this perspective.