Effects of Feeding Glycerol with Different Levels of Non-Fiber Carbohydrates 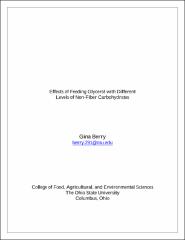 As a result of increased biofuel production in recent years, there has been a surge of new byproducts. Biofuel companies are eager to find new and marketable uses for these components. One such derivative is glycerol, a byproduct of soy biodiesel. Glycerol, as a chemical compound that serves as the framework for triglycerides, is just a few metabolic steps away from glucose, a major energy source for living plants and animals. In ruminants, the glycerol can be converted to propionate in the rumen, the propionate can be absorbed across the ruminal wall, and then the propionate can be converted to glucose in the liver. This attribute of glycerol makes it attractive for producers searching for less expensive alternatives to corn. Also for small batch processors of biodiesel, using crude glycerol as a feed ingredient would negate the need to dispose of it as waste. Previous research with providing glycerol to dairy cattle has investigated its use for prevention and treatment of ketosis. In one study, glycerol was fed at 3% of the cow’s dry matter (DM) intake with a fibrous carbohydrate (NFC) level of 40%. Further research is needed to determine whether a different level of NFC or glycerol would better enhance the positive effects of feeding glycerol. Previous studies utilizing the 40% NFC did not exhibit the level of positive outcome expected by such a compound so chemically close to glucose. This study will more closely examine the effect of different concentrations of glycerol and NFC on animal performance when fed as a total mixed ration (TMR) formulated for dairy cattle. The research was conducted to determine optimal dietary concentrations of glycerol and NFC for the utilization of this biodiesel byproduct in the TMR for dairy cattle. This research should be beneficial to dairy producers searching for cost-effective energy sources, but it also will benefit the biofuel industries nationwide.

Received fourth place in the Agricultural Category at the 2007 Denman Undergraduate Research Forum.