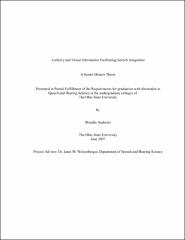 Speech perception is often thought to be a unimodal process (using one sense) when, in fact, it is a multimodal process that uses both auditory and visual inputs. In certain situations where the auditory signal has become compromised, the addition of visual cues can greatly improve a listener’s ability to perceive speech (e.g., in a noisy environment or because of a hearing loss). Interestingly, there is evidence that visual cues are used even when the auditory signal is completely intelligible, as demonstrated in the McGurk Effect, in which simultaneous presentation of an auditory syllable “ba” with a visual syllable “ga” results in the perception of the sound “da,” a fusion of the two inputs. Audiovisual speech perception ability varies widely across listeners; individuals integrate different amounts of auditory and visual information to understand speech. It is suggested that characteristics of the listener, characteristics of the auditory and visual inputs, and characteristics of the talker may all play a role in the variability of audiovisual integration. The present study explored the possibility that differences in talker characteristics (unique acoustic and visual characteristics of articulation) might be responsible for some of the variability in a listener’s ability to perceive audiovisual speech. Ten listeners were presented with degraded auditory, visual, and audiovisual speech syllable stimuli produced by fourteen talkers. Results indicated substantial differences in intelligibility across talkers under the auditory-only condition, but little variability in visual-only intelligibility. In addition, talkers produced widely varying amounts of audiovisual integration, but interestingly, the talkers producing the most audiovisual integration were not those with the highest auditory-only intelligibility.