E2F7 and E2F8, as Potential Mediators of Rb, are Essential for Cell Survival and Embryonic Development 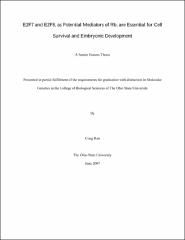 E2f transcription family encompasses a wide-range of functions in regulating cell proliferation, cell differentiation and apoptosis. The two recent additions to the E2F family, E2f7 and E2f8, had unique structural features that set them apart from E2Fs. These structural features enabled these two E2Fs with the capacity for homo-dimerization and hetero-dimerization, and hence they can redundantly regulate downstream target like E2f1 and p53. Unlike the function of other E2F members, E2F7 and E2F8â s biological function in mouse development was found crucial. Simultaneous deletion of E2f7 and E2f8 induces ectopic E2F1-P53 dependent apoptosis in addition to vascular formation defect and placental deformation that eventually lead to early embryonic lethality at E11.5. My work strongly suggests that functions of E2F7 and E2F8 in the extra-embryonic cell lineages are vital for embryos to survive until term. I here show that preserving functional E2F7 and E2F8 in placental tissue allows fetuses deficient for E2f7 and E2f8 go to term, but these animals were still physiologically impaired and died soon after birth. The phenotype stemming from losses of E2f7 and E2f8 in mouse development mimicked that resulted from the loss of Rb, indicating that E2F7 and E2F8 can potentially mediate Rb in regulating cell-cycle progression and apoptosis during development and potentially during tumorgenesis.