Design of a Scanning Tunneling Microscope 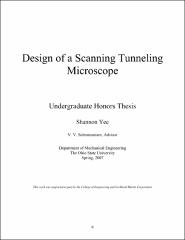 Applications in nanotechnology require the use of tools that can help visualize and manipulate structures at the nanoscale. A scanning tunneling microscope (STM) is a visualization tool that utilizes the quantum mechanical phenomenon of electron tunneling to image features and structures at these small scales. Tunneling results when a metallic probe tip is brought sufficiently close to an electrically conducting, biased sample without making physical contact. A small current is drawn as electrons jump (tunnel) across the gap between the tip and the sample. This current is so small that the medium between the tip and the sample does not break down and become electrically conducting. Once a tunneling current is drawn between the tip and the sample, which are separated by a gap, feedback controls in conjunction with piezoelectric actuators adjust the gap distance in such a way as to maintain a constant tunneling current as the tip scans across the sample surface. STMs utilize this monitoring of the gap adjustment in order to produce images of the sample surface with potentially near atomic resolution. The first STM was developed by Binnig and Rohrer in 1981 and these microscopes are now commercially available. Commercial microscopes, however, are expensive, and not easily integrated with other experiments and processes in the laboratory. The goal of this work is to design and build a relatively inexpensive STM in order to serve as a basic laboratory research apparatus that could be utilized in nanotechnology research. This approach consists of using off-the-shelf components and instrumentation commonly found in a university laboratory (such as oscilloscopes and multimeters) to construct a STM. Automatic feedback controls serve to acquire data and control the piezoelectric actuators to sub-nanometer displacements in order to obtain and maintain a tunneling current. This data is then recorded and analyzed by imaging software developed in MATLAB in order to produce topographical images of samples. A commercially available gold grid is successfully imaged and used as a calibration tool to quantify images of other samples such as a gold film on an alumina substrate. This home-made instrument is potentially capable of imaging surfaces with resolution comparable to those attainable with commercial STMs if placed under vacuum. This work turns into reality the goal of rendering a STM a laboratory instrument as quotidian as an oscilloscope for nanotechnology research. Advisor: Vish Subramaniam