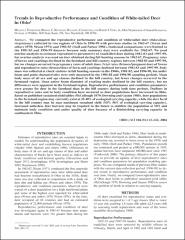 We compared the reproductive performance and condition of white-tailed deer (Odocoileus virginianus) collected in two regions of Ohio in 1996-99 with previous studies in 1962-67 (Nixon and others 1970; Nixon 1971) and 1981-83 (Stoll and Parker 1986). Statistical comparisons were limited to the 1981-83 and 1996-99 datasets because only summary data were available for 1962-67. We used uterine analysis to estimate reproductive parameters of roadkilled deer during 1982-83 and 1997-99, but ovarian analysis was used on deer obtained during fall hunting seasons in 1962-67. Pregnancy rates of fawns and yearlings declined in the farmland and hill country regions between 1982-83 and 1997-99, but no changes occurred in pregnancy rates of adult does. Fetal rates (fetuses/pregnant doe) of fawns and reproductive rates (fetuses/doe) of fawn and yearlings declined between 1982-83 and 1997-99. Body mass was collected at check stations in fall hunting seasons in the 1960s, 1981-82, and 1996-98, but antler beam and point characteristics were only measured in the 1981-82 and 1996-98 sampling periods. Mean body mass of all sex and age classes declined in the hill country, but fewer changes occurred in the farmland region. Mean antler beam diameter of yearling males declined in the hill country, but no differences were apparent in the farmland region. Reproductive performance and condition parameters were greater for deer in the farmland than in the hill country during both time periods. Declines in reproductive rates and in body condition have occurred as deer populations have increased in Ohio. Based on published sustained-yield tables (McCullough 1979; Downing and Guynn 1985), deer populations in the farmland region may currently exist at 35-40% of ecological carrying capacity, while the deer herd in the hill country may be near maximum sustained yield (MSY; 56% of ecological carrying capacity). Increased antlerless deer harvests may be required in the future to stabilize the population at MSY and maintain body condition and antler quality of deer because of a diminishing carrying capacity in southeastern Ohio.