Paleomagnetic Determination of the Age of the Serpent Mound Structure 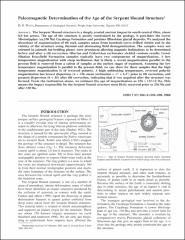 The Serpent Mound structure is a deeply eroded ancient impact in south central Ohio, about 8.0 km across. The age of the structure is poorly constrained by the geology. It post-dates the Lower Mississippian (ca.330 Ma) Cuyahoga Formation and predates Illinoisian glacial deposits. We analyzed the directions of magnetization of 60 rock samples taken from borehole cores drilled within and in the vicinity of the structure using thermal and alternating field demagnetization. The samples were not oriented in azimuth but bedding planes were prominent allowing magnetic inclinations to be determined before and after a tilt correction. Silurian and Ordovician carbonates yielded random results. Lower Silurian Brassfield Formation samples typically have two components of magnetization. A low temperature magnetization with steep inclination that is likely a recent magnetization parallel to the present field is removed from a subset of samples at the earliest stages of treatment. Assuming the low temperature magnetization is parallel to the present field, we can show for these samples that the high temperature magnetization is of reversed polarity. A high unblocking temperature, reversed polarity magnetization has lowest dispersion (k = 138, mean inclination = -1° ± 6.3°) prior to tilt correction, and greatest dispersion (k = 35) after tilt correction, indicating that it was acquired after the structure was formed. From the inclination alone, we estimate the age of magnetization as 256 + 15/-12 Ma. This means the impact responsible for the Serpent Mound structure most likely occurred prior to 256 Ma and after 330 Ma.