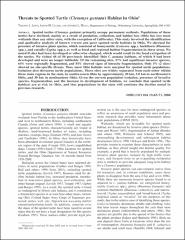 Spotted turtles (Clemmys guttata) primarily occupy permanent wetlands. Populations of these turtles have declined, mainly as a result of predation, collection, and habitat loss (Ohio has lost more wetlands than any other state, with the exception of California). This study involved the identification and qualitative analysis of known (recent and past) spotted turtle habitats in Ohio. We checked for presence of invasive plant species, which consisted of honeysuckle (Lonicera spp.), buckthorn (Rhamnus spp.), and cattails (Typha spp.), as well as local and regional habitat fragmentation in these areas. We noted if sites had been developed or otherwise changed, which would result in the local extirpation of the turtles. We visited 48 of 50 previously identified Ohio C. guttata habitats, of which 8 had been developed and were no longer habitable. Of the remaining sites, 57% had significant invasive species, 64% were regionally fragmented, and 51% showed signs of intrasite fragmentation. Only 5% (2 sites) showed no site-specific threats. Thus, most Ohio habitats were marginal for spotted turtle populations. Isolation also threatens turtle populations. These sites are widely separated from each other within three main regions in the state, in southwestern Ohio by approximately 20 km, 5.0 km in northwestern Ohio, and 30 km in northeastern Ohio. Given the current population isolation, presence of invasive species, fragmentation, and the increase in development of habitats, we conclude that spotted turtle habitats are at risk in Ohio, and that populations in the state will continue the decline noted in previous research.