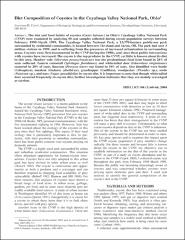 The diet and food habits of coyotes (Canis latrans) in Ohio’s Cuyahoga Valley National Park (CVNP) were examined by analyzing 50 scat samples collected during coyote population surveys between February 1998–March 1999. The Cuyahoga Valley National Park, a 13,770-hectare public-use park surrounded by residential communities, is located between Cleveland and Akron, OH. The park had over 3 million visitors in 1999, and is suffering from the pressures of increased urbanization in surrounding areas. Coyotes were first documented in the CVNP during the 1980s, and since then public interactions with coyotes have increased. The coyote is the top predator in the CVNP, yet little is known about its diet in this area. Meadow vole (Microtus pennsylvanicus) was the predominant food item found in 28% of scats collected. Eastern cottontail (Sylvilagus floridanus) and white-tailed deer (Odocoileus virginianus) occurred in 20% of scats. Raccoon (Procyon lotor) was found in 18% of scats. Also identified were beetle (Coleoptera), muskrat (Ondatra zibethicus), grasshopper (Caelifera), woodpecker (Picoides sp.), seeds (Panicum sp.), and nuts (Fagus grandifolia) in coyote diet. It is important to note that though white-tailed deer occurred frequently in coyote diet, further investigation indicates that they are mainly scavenged as carrion.