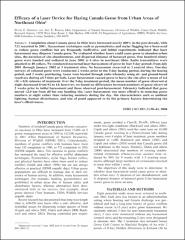 Complaints about Canada geese in Ohio have increased nearly 400% in the past decade, with 732 recorded in 2001. Harassment techniques such as pyrotechnics and mylar flagging have been used to reduce goose conflicts but are frequently ineffective, and initial experiments indicated that laser harassment may disperse Canada geese. We evaluated whether lasers could cause geese to abandon urban sites, the duration of site abandonment, and dispersal distance of harassed geese. One hundred ninety geese were banded and collared in June 2001 at 6 sites in northeast Ohio. Radio transmitters were attached to 40 collars. We conducted nocturnal laser harassment of geese in four 5-day periods from July 2001 through January 2002 at 3 treatment sites. No harassment occurred at 3 control sites. One-day surveys of collared geese were conducted 2 weeks prior to the 5-day hazing period, during the hazing period, and 2 weeks post-hazing. Geese were located through radio telemetry using air- and ground-based receivers during all 3 time periods. Laser harassment caused geese to leave the site after a mean of 4.6 (SE = 0.8) minutes of treatment. Over the 5-day treatment period, the mean number of geese observed at night decreased from 92 to 14; however, we found no differences between numbers of geese observed 2 weeks prior to initial harassment and those observed post-harassment. Telemetry indicated that geese moved <2.0 km from all but one banding site. Laser harassment was more effective in reducing goose numbers at night rather than reducing numbers during the day. Site characteristics such as ambient lighting, human disturbance, and size of pond appeared to be the primary factors determining the laser’s effectiveness.