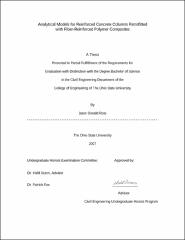 Traditional rebar reinforcement methods in concrete columns have been accepted for many years as the common practice among designers and contractors. There has been a tremendous amount of research completed and designers are capable of predicting the future performance of the columns. More recently, retrofit methods have been used on aging concrete columns. This includes adding an additional layer of concrete or composite material around the existing column to slow the deterioration and to increase the concrete confinement. Current models exist in the use of a combination of a rebar cage and concrete as the retrofit method. Fiber-reinforced polymer (FRP) wraps are fast becoming a new form of technology to replace traditional rebar retrofit technology. The fiber-reinforced polymer wraps are a composite material that can be attached to the existing concrete column using an epoxy resin. The wrap increases the concrete confinement of the column and provides support for the concrete dilation in the column. However, FRP wraps are not heavily used in structural applications because there is not an accepted model that has been proven to accurately predict future strength characteristics of the confined concrete column. The focus of this research project is to use the results of an already completed test of concrete columns confined by FRP wraps, and compare the resulting stress-strain curves to the commonly proposed modeling technology available. FRP modeling is still relatively new and there is not a widely accepted model. The purpose of this research project is to determine how accurately the proposed FRP models predict the strength of the tested columns. There are many different models that have been proposed, but the key to the future of FRP retrofitting is to create a widely accepted, reliable model that engineers can use in design. It is important to normalize the design process of FRP retrofitted columns in order to better use the technology in the future. Advisor: Halil Sezen