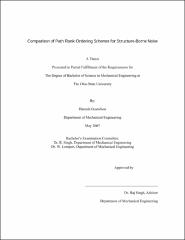 This research examines two rank ordering methods for structure-borne noise transmission paths. One method is the conventional path disconnect comparison (PDC) that is often used because of its simplicity. However, the boundary conditions may change as one or more paths are disconnected. On the other hand, transfer path analysis (TPA) is a method that decomposes the contributions of each path in terms of partial sound pressures. In order to compare these two systems, a simple experimental system was developed. The system consists of two metal plates: a thicker source plate and a thinner receiver plate. The top plate has a higher natural frequency and fewer modes while the bottom plate has a lower natural frequency and more modes. This is similar to a real structure, like a vehicle, where noise is a consideration. The plates in the experimental system are connected by three paths in a diagonal arrangement. The connecting paths can either be steel or plastic. This allows for eight distinct configurations of three paths when paths of similar geometry are considered. In order to ensure a valid model, the acceleration frequency response function results were compared between the finite element model and the experimental measurements. Once the model was validated, finite element and boundary element software were used to measure the path contributions in the PDC method and the TPA method. The results from both methods were tabulated and compared. Advisor: Raj Singh