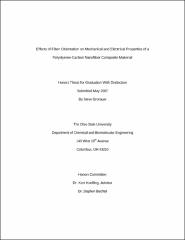 Polystyrene can be reinforced with nanoparticles to enhance the physical properties of the material. Carbon nanofibers are a lower-cost nanoparticle that improve the mechanical and electrical properties of polymer materials. Materials of varying compositions (0, 2, 5, or 10 wt% carbon nanofibers) were studied to examine the effects of composition on tensile strength and electrical resistivity. In addition, processing method was varied (compression molding or injection molding); furthermore, injection molded samples were injected at different speeds (0.75, 1.5, 2.25, or 3 in/s). These processing parameters were adjusted to create different carbon nanofiber orientations to study the effects of fiber orientation on tensile strength and electrical resistivity. Finally, samples were deformed to study the effects of shear strain on fiber orientation. It was concluded that composition and injection speed both significantly affected tensile strength, while tensile modulus was significantly affected by composition only. Composition also significantly affected electrical resistivity. Processing method alone did not have a significant effect on resistivity, though it did significantly interact with composition. Injection speed did not appear to have a significant effect on resistivity, though this conclusion could be due to a small range of injection speeds. Orientation tensors, along with their corresponding eigenvalues and eigenvectors, were calculated for samples subjected to extensional shear. The carbon nanofibers tended to align more in the direction of flow as total strain increased; however, at a certain point, adding more strain ceased to have a significant effect on fiber orientation.