The Function of E2f3a in Mouse Development 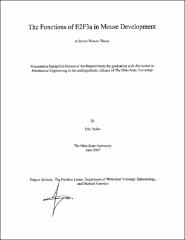 The E2f3 gene is thought to be important for promoting cellular proliferation and normal growth. It is known that deficiency of E2F3 combined with deficiency of the other activating E2Fs causes compounded effects on cellular proliferation, but studies with E2f3 deficiency in development have been limited because the majority of E2f3 deficient mice do not survive past birth. The E2f3 gene locus encodes for two protein products, E2F3a and E2F3b. Based on their expression patterns during the cell cycle and their ability to interact with other proteins, it was hypothesized that E2F3a is an activator and E2F3b is a repressor of transcription. Disruption of the E2f3 locus has been targeted in the mouse, but these models failed to discriminate between E2F3a and E2F3b since both products were simultaneously deleted. The research presented here utilizes an E2f3a knockout to study the functions of E2F3a individually, and also to investigate the relationships of the functions that E2F3a has with the other activating E2Fs. We find that E2F3a loss does not negatively affect mouse development and growth, but when combined with E2F1 loss, it results in developmental defects in the adrenal gland, lung, bone, fat tissue, testicles, and pancreas. Advisor: Gustavo Leone