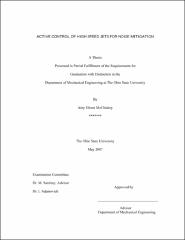 Research, design, and experimentation were performed in the Gas Dynamics and Turbulence Laboratory at The Ohio State University to control far-field noise for high-speed jets and observe the effects of control with the purpose of noise mitigation. Recently localized arc filament plasma actuators (LAFPA) were developed to force an axisymmetric Mach 0.9 jet. Previous experimentation was improved upon by adding four actuators to an eight actuator equally spaced setup. A new nozzle extension was designed to house these twelve actuators and an adaptor was developed to provide flush mounting of the electrodes of the actuators between the nozzle and extension. The twelve actuators were used to excite the flow over a large frequency range, which was expressed in terms of the non-dimension forcing Strouhal number (StDF). Microphones, mounted at angles of 30° and 90°, were used to collect far-field sound pressure levels. The response of the jet varied greatly with azimuthal mode and StDF. The perturbations were observed to greatly affect the far-field sound pressure levels at StDF’s between 0.1 and 5. Furthermore, greater noise mitigation was recorded at higher modes such as azimuthal modes 5 and ±6. This was contrasted to the enhanced mixing observed at lower modes such as m = 1 or ±1. However, the effects of actuation on the flow were independent of azimuthal mode when forced at a StD higher than about 2. While these patterns and results were observed at an angle of 30° to the jet axis, the effects remained unclear at an angle of 90°. However, the general observation was made that forcing at higher modes significantly reduces far-field noise. Advisor: Mo Samimy