Disturbance effects of roads and fences on the spatial patterns of large mammal dispersal and migration in Amboseli/Tsavo Ecosystem, Kenya 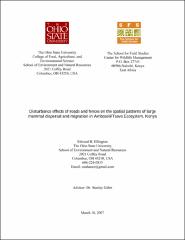 Increasing human populations and changing land-use practices threaten the continued existence of viable populations of large mammals in the Amboseli-Tsavo Ecosystem. These two problems threaten to constrict the wildlife migratory corridor and dispersal areas within three group ranches, Mbirkani, Kimana, and Kuku. This study sought to analyze the status of the migratory corridor and the dispersal area within Kimana Group Ranch. Two major human disturbances, roads and fences, were mapped. The harmonic mean distance of wildlife locations (n =116) from the nearest road within the group ranch was 102.9 m, which was greater than the harmonic mean distance of uniformly distributed random (t=2.84, df=122, p < 0.05). The harmonic mean distance of wildlife from roads was used to create buffers, which resulted in 24.90% of the group ranch under disturbance from roads and fences. Group size was expected to be negatively correlated with average distance from roads and was found to have a weak positive correlation. African elephants (Loxodonta africana) were a special focus because of their status as keystone habitat modifier species and their frequent implication in human-wildlife conflicts. In addition to all observations of live elephants, sign (dung, tracks, and vegetation damage) were also recorded. Three high concentrations of elephants were found, one a result of contraction of the migration corridor between the two fences. The fences were found to have substantial human-inflicted damage and the larger of the two was not electrified. Observability was an issue because habitat, body size, and group size all influence the probability of detection. Local people are settling outside of the fences, fence electricity is not maintained, and local people often undermine the integrity of the fence by damaging it. Factors not examined in this study likely have strong influences on the spatial distribution of wildlife in Kimana group ranch. Additional factors possibly affecting wildlife movement patterns include habitat, water sources, homesteads, and livestock. Future studies will incorporate habitat, water, homesteads, and livestock mapping within Kimana group ranch, the use of aircraft could provide more accurate wildlife locations. Advisor: Stanley Gehrt