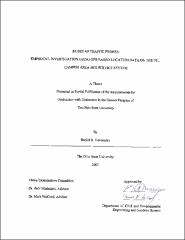 The Bus Location Information System (BLIS) was conceived, developed, and implemented by researchers and students in Civil and Environmental Engineering and Electrical and Computer Engineering for the Campus Area Bus Service (CABS), the Ohio State University transit system. Campus buses were fitted with Global Positioning System (GPS) units, which determine latitude and longitude coordinates of the receiver at a given time – and, therefore, the coordinates of the bus on which the receiver is installed – by triangulating among a series of signals transmitted from a set of satellites. These locations are communicated to a central server, where they are translated into distances along bus routes with respect to each route’s reference point. The various location and time points can be organized to produce bus trajectories, which can be plotted in what is known as a space-time diagram. With these space-time coordinates, speeds of the buses as they traverse the route can be calculated. These speeds can be analyzed to determine what effect time has on speed (i.e. time of day, day of week, month of year), what effect space has on speed (looking at speeds within context of surrounding roadway infrastructure), and the simultaneous impact of time and space on the speeds of the buses. It was found that while the time of day has less impact on the speed than the location, there are patterns throughout both the day and along the route. It was also found that the time and space factors do not always act independently. Also, many of the patterns could be explained by examining the surrounding infrastructure features including stop lights and signs and bus stops, but some could not. The speed information extracted and the patterns identified could be beneficial in several ways. First, they could be used for better off-line transit planning including route and schedule design. Second, if the data is collected in real-time, the results could be useful for real-time bus control and the provision of bus travel time and arrival information to passengers. Finally, the results could complement information extracted from other sensors for the purpose or real-time management of overall transportation networks including private automobile, commercial vehicle, and public transit flows. Advisors: Rabi Mishalani and Mark McCord