Mass Transfer of Near Critical Carbon Dioxide in Poly(Methyl Methacrylate) 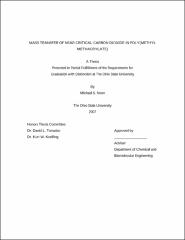