Connections between theory of mind and pronoun competence: Typically-developing children and children with autism spectrum disorders 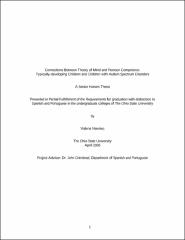 Pronouns are a complex part of our everyday language with both grammatical and pragmatic dimensions. Pronouns have long been a subject of research; however there are few comprehensive examinations of their grammatical aspects (gender and case), pragmatic aspects (interlocutor specificity and discourse continuity), and their possible cognitive correlations (theory of mind). This study examines all these dimensions with the purpose of providing a clearer understanding of how linguistic and non-linguistic cognition interact. The two groups participating in the study were typically-developing children and children with Autism Spectrum Disorders (ASD). Research has shown that ASDs hinder the cognitive ability of theory of mind, which may affect pronoun use. Looking at the different dimensions of pronouns in this specific population will help address whether a difficulty with theory of mind also encumbers competence in pronoun use. The applied aims of this study include a further understanding of the linguistic bases that may relate to theory of mind operational problems, as well as finding linguistic features salient to pragmatic language use. The increased knowledge of linguistic features impacted by an ASD could help provide more effective future treatments. The study consisted of five tasks that examined different components of pronoun use as well as theory of mind. The gender task asked children to identify characters based solely on gendered pronouns (he and she). The case task was a grammaticality judgment task that asked children to identify nominative and accusative pronoun case errors (him is on the rock). The discourse task (adapted from Song & Fisher 2005) asked children to track a referent through a story using pronouns. The interlocutor task was a production task and asked children to identify a referent to an interlocutor new to the discourse situation. Finally, an unseen-displacement task was used to assess theory of mind. It was predicted that grammatical properties of pronouns would be acquired before pragmatic dimensions, and that theory of mind ability would correlate with the pragmatic but not the grammatical tasks. The findings showed that children performed significantly better on the grammatical gender task than the pragmatic tasks. They also illustrated a slight correlation between theory of mind task success and the use of an adult-like noun phrase to introduce an unfamiliar referent. The ASD children passed the theory of mind task and performed well on the structured language tasks. Future research will look at more typically developing children at the cusp of theory of mind ability to determine the significance of the slight correlation between theory of mind and the pragmatic interlocutor. In addition, younger participants with ASD will be studied to allow for a better comparison between pronoun use and theory of mind ability in children with an ASD. In order to develop more efficient and effective treatment for the language problems that often accompany an autism spectrum disorder, it is necessary to continue looking at the possible affects of theory of mind on language, including the search for other syntactical/grammatical tasks that may be related to theory of mind ability. Advisor: John Grinstead