Jesuites ghostly wayes: Catholic Political Policy and the Control of Catholic Recusancy during the Reign of Elizabeth I 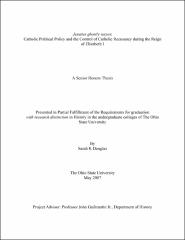 In 1558, Elizabeth I would oversee a contentious religious settlement reinstituting Protestantism in England. After this initial break with Rome, political policy regarding Catholic practice in England was created merely to control English Catholics and enforce loyalty to the Crown. However, after the Northern Rebellion of 1569 and the Papal Bull excommunicating England’s Queen Elizabeth I in 1571, the Queen learned that Catholicism could potentially breed wider upheaval and possibly rebellion against her. Due to this fear, the government drastically increased the amount of political policy generated to prevent Catholic practice. However, due to the failure of local officials to enforce laws and the limits of early modern society and technology, effective enforcement proved impossible. To protect the Queen and the Crown, intelligence networks were therefore relied upon to identify possible enemies to the Crown and plots forming against the Queen. While experts debate the size and nature of these networks, their work would secure the throne for the Queen and help her to maintain her rule for 45 years.